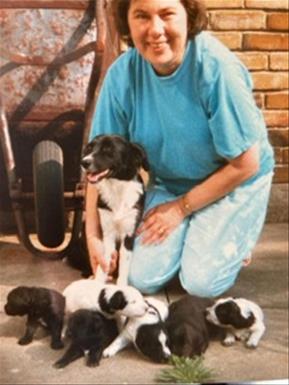 Animals were an integral and important part of Shirley's life and this is why she has requested that instead of flowers, where people can, they give even the smallest of a donation to this fantastic cause enabling her to continue helping animals after her sad passing.

Alongside husband Harry, all waifs and strays would be taken in and a loving, caring home provided. Down the years they had pets that included fish, budgerigars, a canary, cats and dogs (apologies to those missed) and at times growing up it felt like the family were on Noah's Ark but it was all good fun.

In addition to directly caring for animals Shirley was a generous donator to various animal charities and visitor to animal rescue centres whilst away on holidays. She even sponsored a donkey after one visit to a sanctuary which has become an integral family member.

She loved the countryside, always at her best when visiting Cornwall and Ireland especially, two places that she looked upon as second homes. Often you would call into visit and Countryfile or a similar nature based program would be on the TV with both Shirley and Harry glued to it.

Another passion of Shirley's was music. She spent her latter teenage years growing up in the swinging 60's and loved the music scene. Later in life, on a Saturday she could be found often in the kitchen baking listening to various 'Dreamboats and Petticoats' 60's cd's that contained all the hits from that era. This we are sure took her back to her youth for a few hours as she sang and worked in the kitchen.

Always known to husband Harry was Shirley's other love. Oddly enough he is another Harry, Harry Webb better known as Cliff Richard. It is fair to say that she absolutely adored the English Elvis but don't worry Dad she adored her Irish Harry even more.

Shirley was very creative. In addition to her baking skills she could darn, crochet and knit making numerous items for family and friends alike. A skilled dressmaker, it is said that she once made a dress for Helen Shapiro (the Madonna of her day) to wear on an appearance on Top of the Pops.

Never seeking the limelight, Shirley was the driving force behind the scenes for the family, making sure that everybody had a loving caring environment in order to be able to do the very best that they could. This gave everyone a great start in life and sadly is a debt that we (the children and grandchildren) will never be able to repay - THANK YOU xxxx.

You will be very sadly missed by all that knew you but vitally your legacy, values and loving nature will be carried forward by us all, your very loving family xxxx